Allow people to post announcements to a restricted channel from time to time, with admin approval. This bot surfaces requests to the admin team for approval, and posts the announcements on behalf of the author once approved.

To find out when a user sends a direct messages to the app's bot we need to subscribe to the im.message bot event sent out through the Events API. The Events API sends a POST request to a specified URL whenever certain events occur in a Slack workspace. In the case of the im.message bot event, Slack will send an event as soon as the app's bot receives a direct message. The event will include information about both the message and the user who sent it.

Once a user sends the bot a direct message, the bot replies with a button to start a new announcement. When a user clicks this button, the bot will receive a request on its Interactive Components endpoint. Using the trigger_id in that payload, the bot can make a call to the views.open endpoint to open up a modal with the user. The user can draft their announcement in this modal and submit it to the bot. To include interactive functionality such as buttons and modals, you'll need to enable Interactive Components in the app settings and supply a URL.

When the bot receives the modal submission, the bot will respond to the direct message with a preview of what that announcement would like using the chat.postMessage method. The app will also append a 'send request' message button to the message. The user can click this button to send a request to an admin for approval.

4. Send the message to an approver

When the user clicks the 'send request' button, the app will receive a POST request on its Interactive Message endpoint. The request will include details about who clicked the button, the contents of the original message, and a response URL. The response URL can be used by the app to update the content of the original message using an HTTP request with a JSON payload. When the message action request is received, the bot sends a direct message to a predefined approver asking them to either 'accept' or 'reject' the message using message buttons. At the same time, it sends an update to the user using the response URL to let them know that the message is pending approval.

Once the admin has approved the announcement, the app sends a message to the user using the chat.postMessage web API method. The message shows the updated status of the approval along with "post announcement" and "cancel" message buttons.

To post into a restricted channel, this kind of app must either be installed by a team admin approver _or_ a user with posting permissions in that channel. 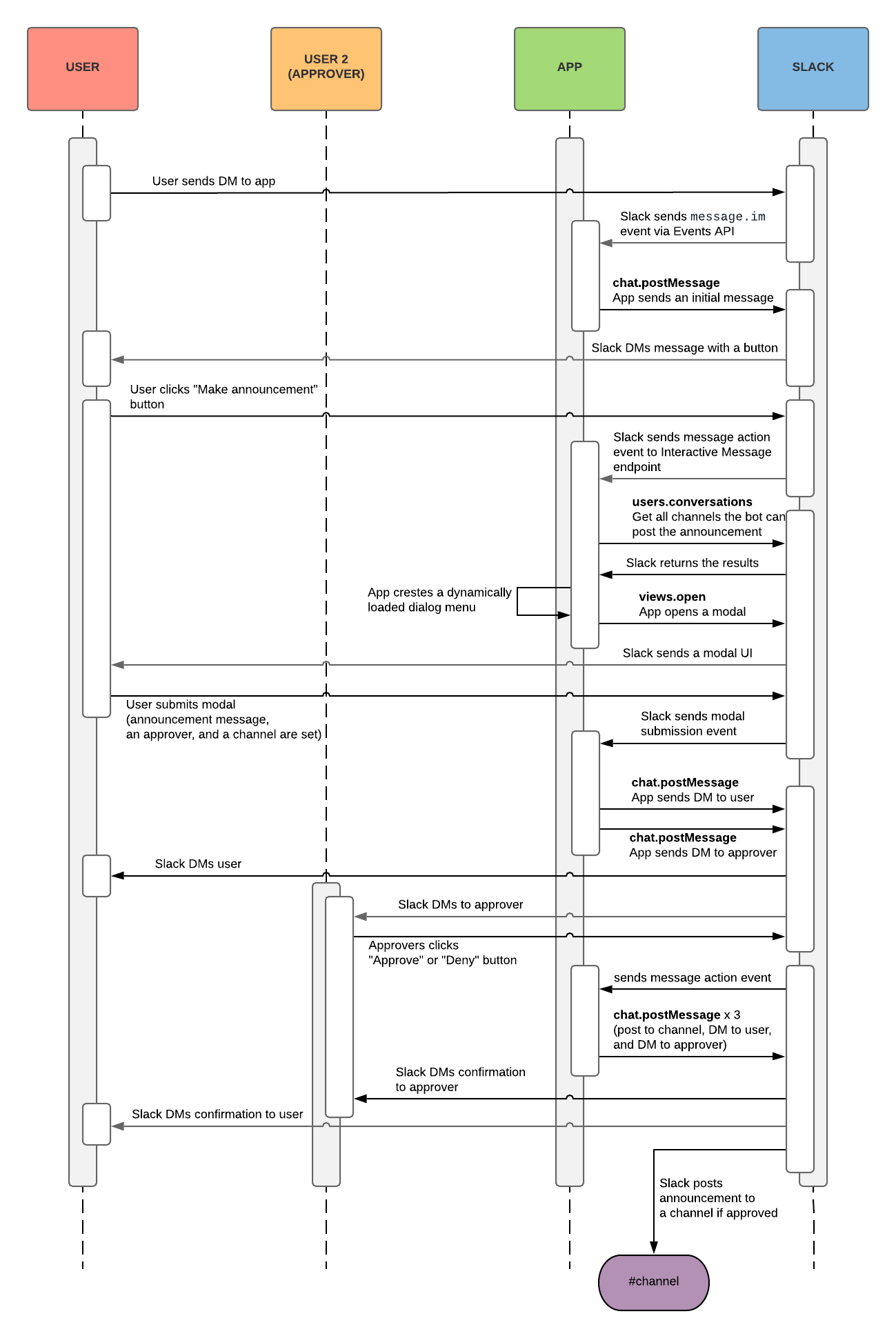