New Slack apps can act independently of a user token. Build a bot user powered by only the specific permissions it needs.
Learn more
Beginner

This article describes an outdated approach to Slack apps. New Slack apps act independently of a user token. Build a bot user powered by only the specific permissions it needs. Check out new Slack apps now.

Enable conversations between users and apps in Slack by building bots.

A bot is a type of Slack App designed to interact with users via conversation.

A bot is the same as a regular app: it can access the same range of APIs and do all of the magical things that a Slack App can do.

But when you build a bot for your Slack App, you're giving that app a face, a name, and a personality, and encouraging users to talk to it.

Your bot can send DMs, it can be mentioned by users, it can post messages or upload files, and it can be invited to channels - or kicked out.

Bots are not cybernetic infiltration units, and it is unlikely that they dream of electric sheep, though we can't rule it out. 🤖

Since your bot is capable of doing everything that a Slack App can do, we're going to limit our focus to a common use-case for bots. The following steps will get you to the point where you have a bot waiting for messages with trigger words and sending simple responses.

From there, you can start bolting on whatever kind of amazing app logic or nuclear-powered jet-packs you can imagine.

Before you start, you'll need a Slack App. If you don't already have one, click the following button to create it:

That done, you're all ready to arrange the architecture of this automaton.

To use your Slack App as a bot, first you'll need to create a Bot User for it.

Head to your app's settings page and click the Bot Users feature in the navigation menu.

You'll be presented with a button marked Add a Bot User, and when you click on it, you'll see a screen where you can configure your app's bot user with the following info:

Once you've completed these fields, click the Add Bot User button and then Save Changes.

Great, you've just created a bouncing baby bot! Don't leave the app settings yet though, there's just one more bit of configuration left to do.

2. Setting up the Events API

The Events API is a bot's equivalent of eyes and ears. It gives a bot a way to react to posted messages, changes to channels, and other activities that happen in Slack. When these events happen, a data payload will be sent to your bot, and it can use that data to form a useful response.

Giving your bot access to the Events API is pretty simple:

Good news! Your bot is looking more and more life-like, and now it's ready to find a home.

3. Installing the bot to a workspace

A bot user is added to a workspace by installing the app that the bot is associated with. Once you do, you'll get a bot token that is imbued with the bot scope. This token can be used with a subset of Web API methods that we'll discuss later.

If you had already installed your app in the past, you'll need to reinstall to grant the additional bot scope. The process is the same either way:

Once installed, you will have generated a bot token that you should store for use later on - you can find it in your app's settings under Install App > Bot User OAuth Access Token.

Bot tokens can also be generated using the OAuth install flow if you are distributing your app beyond your own workspace.

Your bot should now be happily dwelling in the channel picked during the install process. It will be listening out for users posting in that channel, and for posted messages that mention the bot. Now you need to tell it what to do when it hears something.

In a previous step, we configured the event subscriptions for your app, but now we have to actually do something with the data that will be sent with each event.

Let's imagine a simple conversational bot that responds to being mentioned by sending a couple of follow up messages: 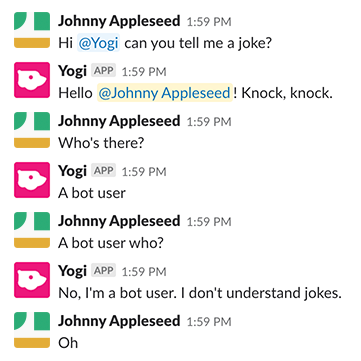 There are 4 events triggered in this conversation: the first is an app_mention event from the first message that mentions the bot; the next three are message events for each of the messages posted by Johnny.

Our bot will need to be able to interpret each event and respond accordingly.

We've avoided showing you any specific code up until now, but in the following steps we're going to explain the process and then show very simplified Express/Node.js examples of what your app logic should look like. These examples translate readily into most modern programming languages.

The first thing we need to do is create some app code that will correctly receive the events.

Each event will trigger a request, containing a JSON payload, sent to your configured Request URL. The Events API docs contain a full description of the shape of this JSON, and the reference for app_mention and the message.channels contain any details specific to each event type.

Your app has to be able to receive and parse this JSON, and then send an immediate confirmation response to each event request, as described in the Events API docs.

Here's how we might build our code for receiving events:

Now that you've written code to handle an event, you can think about how to respond in a 'bot-like' way.

For a bot, being mentioned is usually the triggering event for a conversation, just as a human will respond when they hear their name.

Your app code should use the type field inside the event payload to spot these app_mention events, and differentiate them from any other events it might receive.

In addition, you don't want to respond to every mention, only the ones that are actually intended to trigger the "tell a joke" flow.

To do that, use the text field from the event payload, which contains the text of the message that the mention was contained in. When text mentions the bot and includes the words "tell me a joke", the bot will respond; otherwise it'll just stay quiet.

With the call to chat.postMessage, the first line of the joke is sent:

To send this, your app should use that API method with the token you stored earlier. Here's an example request:

You can read the API method reference for more info on building this request. You can, of course, use all the special formatting, attachments, and interactive components available for messages, but for now keep it simple.

So, your bot has uttered those first magical words, and you can assume that the user will reply with the standard "Who's there?" response. Let's find out how to keep the joke going.

Responding to other messages

As we said before, the flow we're describing contains an app_mention event followed by three message events. In order to identify the differences between those three messages, the app logic must become a bit more complex.

The first thing you need to do is use the type field inside the event payload to look for these message events.

Next, use the text of the message in the event payload to decide which kind of response your bot should make.

Added to the code from previous steps you'll have something like this:

Congratulations, your first bot is now alive and talking! You should now be able to go to the channel you installed the bot into and strike up this conversation with it. Remember to laugh politely when it tells you the punchline.

Your next steps should involve adding some more complexity to your bot to make it useful.

In the steps above, we made a lot of assumptions of simplicity. For example, we expected that users would respond with a very specific spelling, we assumed a test environment where there were no other conversations happening, and so on.

For a real bot in production, some of these assumptions would break the behavior of the bot. So let's cover some situations that you should address for your own bots - think of these as best practices rather than specific instructions to follow.

In our example bot, we've used a mention as the triggering point for a specific conversation, but you'll notice that your bot will still respond if you skip some of the steps - for example if you type Who's there?, your bot will respond to this message with A bot user, even if you didn't mention the bot or start at the beginning of the conversation.

A solution to this might involve tracking the beginning of a conversation, the participants involved, and the progress through the flow. For example, when the user first mentions the bot, a database entry is created that identifies that user and the open workflow with them.

As the user progresses through the flow, the database records this, and the user is unable to repeat earlier steps in the conversation (unless of course that is a desired behavior). Once the workflow is completed, the database entry is also marked as complete, and the bot waits for another mention before starting anew.

Be aware that a user might choose to reply to your bot's messages in a thread rather than at the channel-level. Your bot will still receive message events for these threaded replies, but you will have to add some extra logic to ensure that your bot responds to the user in the relevant location.

Check out the Threading Messages docs for more information on how to spot the difference between messages and threaded messages.

Because your bot will be interacting with humans, it's unlikely that you can expect consistent spelling and phrasing across messages from different people that might be trying to invoke the same thing. For example, our simple example bot used the phrase tell me a joke to trigger the start of the workflow, but at a very basic level a user might also try typing what's a good joke? or make me laugh.

Your bot can get more complex by broadening its understanding of natural language queries to capture a wider range of potential trigger phrases. Alternatively you can be more prescriptive about the exact phrasing to use, and provide user education to train correct usage.

Integrating with other services

The real magic of a bot comes when it is connected with external services, providing a seamless conversational interface for them from within Slack.

There's a huge range of possibilities for what your bot could do, so it might help to start with a great resource like the Botkit Community.

Like other APIs and integrations, bot users are free. Unlike regular users, the actions they can perform are somewhat limited. For workspaces on the Free plan, each bot user counts as a separate integration.

Bot Users, and bot tokens, can be used with a slightly restricted set of Web API methods. These methods are shown below:

Methods for the modern bot